September 26, 2008: Coveted invitations were hand delivered to select guests at various hotels around the city. The Ungaro show was scheduled to start at 1:00 pm in the Carousel Room at the Louvre. We made our way through the crowd of onlookers, photographers and television cameras from Europe to Shanghai — it seemed they were all flashing on beautiful Isha Abdullah in a gorgeous one-shouldered Ungaro sweater and charmeuse skirt. Esteban Cortezar, the house’s young Cuban-born designer’s fans were front row, including Anna Wintour of Vogue and actress Eva Mendes. The show featured the brilliant colors and expertly draped styles for which Ungaro has long been known. After, it was pandemonium backstage – tons of fashion glitterati air kisses, congratulations and more interviews, while everyone anticipated the reviews. 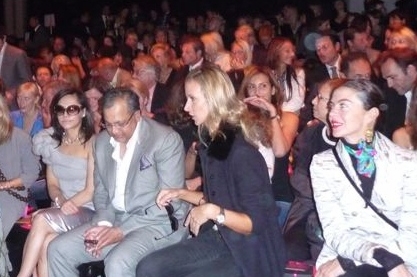 Isha and Asim Abdullah, owners of Ungaro, at the Ungaro Spring 2010 Fashion Show in Paris 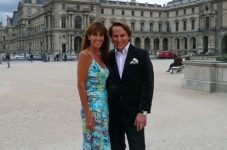 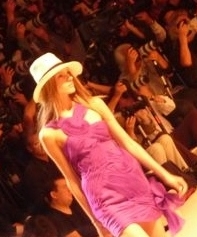 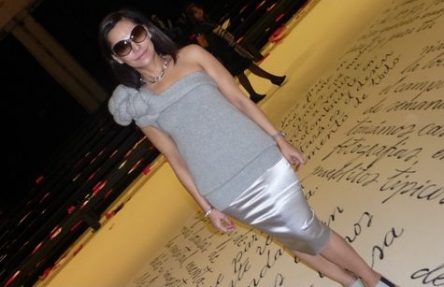 After an all-too-quick disco nap, we headed to the private Ungaro dinner at the Paris apartment of Munir Mousharif, Ungaro CEO. Late night was at SENS – wild with models, photographers, French socialites and celebrities partying until the wee hours.

We made a mad dash to the Louvre’s Carousel Room once again, this time for front row at Leonard. Wild colors and flowing gowns characterized the show, very much in the Leonard spirit. Another backstage scene with the international fashion crowd, and we were off to Pershing Hall.