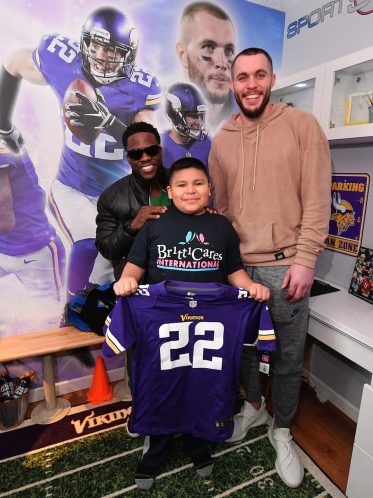 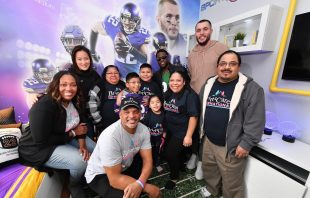 Andrew Rojas, a Minnesota boy battling leukemia gets a surprise visit from comedian Kevin Hart and Vikings safety Harrison Smith at the unveiling of his football-themed Imagine Me bedroom makeover by BrittiCares and Rally Health 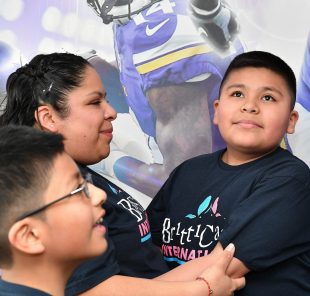 Andrew Rojas with his mom and brother

Imagine walking into your bedroom and finding your favorite NFL player and a world famous comedian! That is what happened yesterday to 11-year old Andrew Rojas of Eagan, Minnesota. Just one day before the biggest football game of the year, comedian Kevin Hart and Minnesota Vikings safety Harrison Smith visited Andrew’s home and unveiled his new football-themed bedroom.

Andrew has been battling leukemia since 2015. Through a partnership with digital health company Rally Health and BrittiCares International, Andrew received an “Imagine Me” bedroom makeover. Harrison even signed a wall in the bedroom — “To Andrew…Stay Strong!”

“In my line of work, I get to make a lot of people smile and laugh, but nothing tops being able to make a deserving child like Andrew smile from ear-to-ear. His new room is a big hit,” said Hart, a Rally Health Ambassador and longtime supporter of BrittiCares.

“Leukemia is a tough opponent, and Andrew has put up a brave fight for nearly three years. Thankfully he’s feeling pretty good right now and can fully enjoy this amazing day because it’s one that he and our family will never forget,” said Andrew’s mother Ericka Rojas.

BrittiCares International was founded in 2004 by Shirell and Jamie Henderson and their then-10-year-old daughter Brittiana who had been diagnosed with cancer. Britt’s goal was to help other kids like her who were facing cancer. Today, her parents continue her legacy, creating “Imagine Me” bedrooms – spaces of hope – for children with cancer.