Martin Luther King, Jr. (January 15, 1929 – April 4, 1968), lives through his words and actions on behalf of black, poor and oppressed people in the United States. Arrested and jailed 29 times in his life, he responded on religious, legal, political and historical grounds, without violence. Just 39 years old when assassinated, Martin Luther King, Jr.’s words continue to inspire. 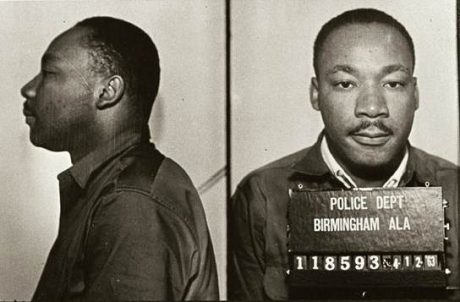 April 1963, excerpts from his Letter from Birmingham Jail:

“Injustice anywhere is a threat to justice everywhere. We are caught in an inescapable network of mutuality, tied in a single garment of destiny. Whatever affects one directly, affects all indirectly… Anyone who lives inside the United States can never be considered an outsider anywhere within its bounds.”

“We know through painful experience that freedom is never voluntarily given by the oppressor; it must be demanded by the oppressed.”

King expressed frustration with white moderates and clergymen too timid to oppose an unjust system:

I have almost reached the regrettable conclusion that the Negro’s great stumbling block in his stride toward freedom is not the White Citizen’s Councilor or the Ku Klux Klanner, but the white moderate, who is more devoted to “order” than to justice; who prefers a negative peace which is the absence of tension to a positive peace which is the presence of justice; who constantly says: “I agree with you in the goal you seek, but I cannot agree with your methods of direct action”; who paternalistic-ally believes he can set the timetable for another man’s freedom; who lives by a mythical concept of time and who constantly advises the Negro to wait for a “more convenient season”.

August 28, 1963, March on Washington for Jobs and Freedom, his infamous I Have a Dream speech: