Led by Most Valuable Player Madison Bumgarner, the San Francisco Giants won an exciting World Series Game 7 against the Kansas City Royals by a 3-2 score, in Kansas City, on October 29, 2014. The victory was sealed with a commemorative custom-designed sterling silver trophy from Tiffany & Co. Additionally, every Giant will receive a Tiffany & Co. World Series ring at their first home opening game of the next season, on April 13, 2015.

The World Series Trophy created at Tiffany & Co.’s workshop in Rhode Island features 30 pennants representing the teams in the American and National Baseball Leagues. The pennants encircle a dome base etched with latitude/longitude lines symbolizing the globe, adorned with 24 karat gold vermeil applied stitches representing those on a baseball. Engraved on the base are the words, “Presented by the Commissioner of Baseball” along with the commissioner’s signature.

Giants officials and the designers at Tiffany & Co. will likely collaborate to create a third World Series ring that celebrates the uniqueness of the 2014 World Series win while marking the team’s rare achievement of three Series wins in five seasons. In addition to the players, all full-time Giants employees get rings, though some receive a less expensive and scaled-down version of the player rings. 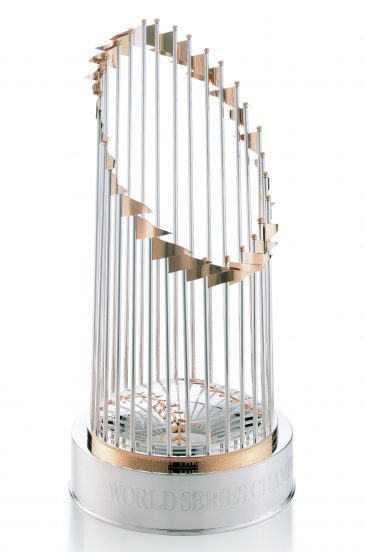 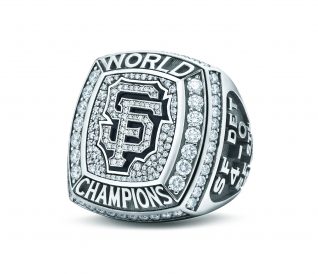 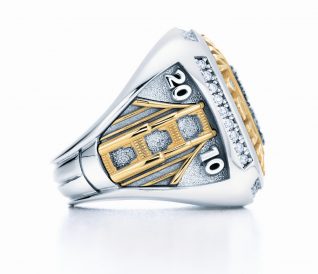 The rings from 2012 have a white gold face with the “SF” logo made of 52 mêlée diamonds. On both sides of the ring, seven round diamonds represent the organization’s seven championships. Each ring includes an individual player’s name, uniform number and a cable car design. Etchings on each commemorate the 2012 postseason victories.

The World Series 2010 rings are cast in white gold with 77 diamonds, about one carat in weight, many of them used to create the interlocking “SF” logo on the top of the ring. One of its more distinctive elements is a Golden Gate Bridge tower in yellow gold on one side. The other side has the World Series trophy underneath a ribbon that bears the recipient’s last name.