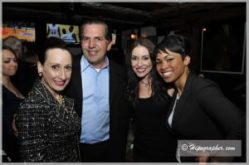 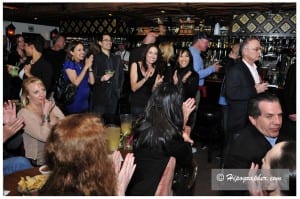 RedCarpetSF, the website, recently launched a television show called Red Carpet Bay Area on KRON4. The brand new show airs bi-weekly on Saturdays in the prime 7:30 pm time slot as the Northern California lead-in to Entertainment Tonight. Red Carpet Bay Area premiered on March 13, 2010. I was honored to be among just a handful of guests invited to watch it with Marybeth La Motte, the executive producer and show host, at La Barca restaurant in San Francisco.

One of the first things I noticed about Marybeth was her enchanting smile and her pleasant personality. She gave such a warm welcome and introduced me to her guests and close friends. Among the guests: Margaret Mitchell, co-founder of EpiCenter MedSpa, one of the nation’s top medical spas; Charleston Pierce, model and CEO of Charleston Pierce Presents, who has worked with supermodels such as Tyra Banks and Cindy Crawford; Bilques Smith, an accomplished account executive for KRON4; Sarah Granger, founder and managing director of SF Bay Style, a popular online blog, and Moanalani Jeffrey, socialite columnist for the San Francisco Examiner who is also a photographer.

I had a fabulous time meeting these people at the premiere, but, of course, the highlight was watching the inaugural episode of Red Carpet Bay Area. The show was fresh, vibrant, upbeat, fashionable, and contemporary. Everything pointed to success, from the quality of information, the presentation of the stories and superb video editing, to the attractive host with her engaging and beautiful smile.

Photographer Jeffrey Hipona captured intimate moments from the premiere night. Marybeth La Motte could not stop smiling with joy and pride — very well deserved. So, cheers to you Marybeth! We wish you nothing but success and look forward to watching more on Red Carpet Bay Area! —  Vivi Andrijani

Watch each of the Red Carpet Bay Area premiere segments: