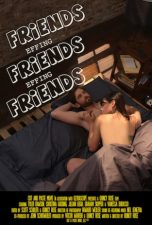 “I wanted to explore themes of infidelity and the dualities that can exist within a person,” explains Rose. “It’s been my experience that people who cheat are not usually doing it with the malicious intentions of harming their significant other. However, they almost always do; be it by confession due to overwhelming guilt; or sheer sloppiness; or because the person they had the affair with turns out to be a total psycho and decides to boil their pet rabbit in order to express just how much they love them. Basically, the truth will come out eventually.”

Wearing his influences on his sleeves, Rose takes on subjects of deeper thought within his universe of deception. He is not shy about telling the truth and approaches the subject of sex without apology in FEFEF. While the title promises skin, this film is not a typical sex-romp comedy. Below the surface are serious undertones exploring existential themes of guilt, what it means to be in a relationship, and the possibility of finding deeper meaning when you know your partner is cheating on you.

Rose explained that it was important for him to broach some serious subjects, albeit in silly tones, such as the taboo of young, heterosexual males experimenting with their male friends while growing up. “I just felt that’s something you don’t really see in cinema, unless it is being mocked or used to tease a character. And I know it happens so much more than people are willing to admit. Maybe with even the slightest bit of light, someone struggling with this secret can laugh and let it go.”

In case you missed the world premiere last week, there is one more screening of FEFEF, on March 10 at 4:30pm at Cinequest Film Festival in San Jose. Writer/Director Quincy Rose will be there, along with cast members Tyler Dawson, Christina Gooding, Jillian Leigh, Graham Skipper and Vanessa Dubasso.