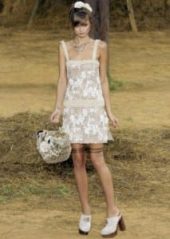 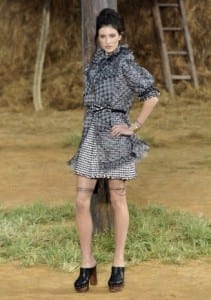 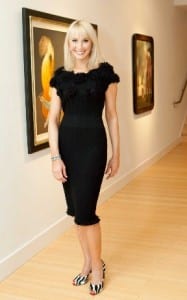 Victoria Yeager in a dress by CHANEL

I went to fashion nirvana, and it was the CHANEL show. From the moment I walked into the Grand Palais with its enormous glass dome and the sun shining through, I knew it was special. I found my seat and then noticed the setting. The “runway” was a country scene that consisted of a meandering oval dirt path around a giant two-story barn adorned with garlands of flowers and a large hay bale. Prince, Rihanna and Claudia Schiffer were all seated in the front row. Apparently, Marie Antoinette and her “rustic” retreat Hameau de la Reine at Versailles inspired the collection, and the setting.

Models emerged from the hay bale, their hair a bit mussed up, and smiled, even flirted, with the cameras. Their look was classic Chanel – lots of black and ivory, satin ribbons, bows, lace and boucle – with a youthful twist. Although black and white were the predominant colors, the collection also exhibited the classic combination of red and blue. For example, red appeared as a poppy print on an ivory mini-skirt, and the colors were combined on a sassy sequined mini dress.

A majority of the skirts were short – either figure fitting with thigh slits, or voluminous and bell-shaped. There were also a few long skirts of sheer, transparent and flowing fabrics. The minis were paired with fun, high-heeled clogs. The stockings were decorated to look like the model had on a thigh-high garter, or ballerina-like satin straps that criss-crossed up her calves.

Everything was fabulous. I honestly cannot name a favorite piece! When I thought it could not get any better, three-quarters of the way through, Lily Allen emerged on a platform that rose through the floor and performed live for the remainder of the show! To call it a “fashion show” would not do it justice – it was fashion theatre — a fashion theatre masterpiece. — Victoria Yeager