Home Between Us ... Tales from Paris Fashion Week

Although it was just a few weeks shy of Spring in Paris, the frigid temperatures outside provided a fitting environment for viewing the Fall/Winter 2010 women’s ready-to-wear collections. Based on the shows that I attended, it looks like Fall 2010 will be a virtual cornucopia for fashionistas – the variety of shapes, styles, fabrics and colors means there is plenty of new, must-have closet candy for everyone. While the mini-dress still reigned supreme, longer hemlines appeared as well. The pencil skirt suit will have some renewed competition from the tailored pantsuit. Camel, gray, black and white shared the runway with other classic autumnal shades like chestnut brown, burgundy, forest green, and mustard yellow, punctuated by hints of burnt orange, navy, fuchsia, light blue and petal pink. Leather and luxurious knits abound, but the collections also included sheer chiffon and lace, as well as fun accents like feathers and sparkly crystals. Most noticeably, fur was everywhere! Not only on the runways, but also in the streets of Paris (and the boutiques — Roberto Cavalli on Rue du Faubourg Saint-Honore is home to a white mink sofa!). Both real and faux fur are in vogue – again, something for everyone. 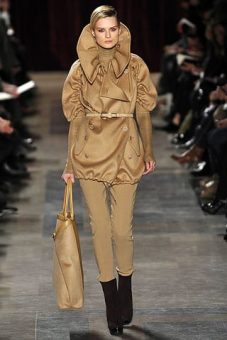 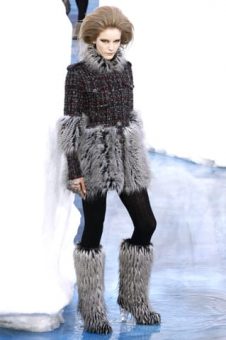 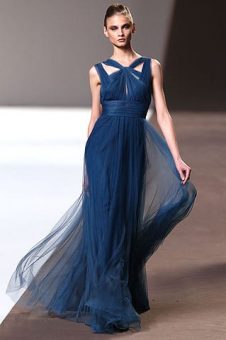 AKRIS designer Albert Kriemler presented an elegant and sophisticated collection full of very wearable pieces. The parade of cashmere and wool pantsuits and fitted leather and fur dresses lacked some of the sexiness of his last Fall collection (in which I loved the strategically placed cutouts), yet still managed to impress, thanks in part to the use of noteworthy fall shades like coffee, mustard, loden and cassis. Outerwear was plentiful – both in the number and voluminous shape – yet by cleverly keeping the lower half of the sleeves narrow (as he did with the camel overcoat that opened the collection) or belting an otherwise puffy coat, Kriemler managed not to overwhelm the models or clothes underneath. The same could not necessarily be said for the bags – the snap-top clutches were practical and chic, but the enormous trapezoid-shaped numbers looked like they might outweigh the models.

CHANEL: Last October we were treated to a breathtaking Marie-Antoinette inspired country farm scene, so what could top that? An arctic wonderland complete with several story high real icebergs! Mr. Lagerfeld had the icebergs trucked down from Scandinavia, proudly noting that no one has ever brought thirty tons of ice and snow to Paris for a 15 minute show. And I thought the mink sofa was decadent! Despite the unbelievable runway scenery, the clothes at Chanel still stole the show. As the models splashed through the watery runway (aka iceberg melt), fur – the faux kind — was everywhere. It was incorporated subtlety as trim and woven into the tweed skirts and jackets, and then more brazenly as handbags, miniskirts and even as full-length furry trousers! While I doubt that the trousers will make their debut on even the most fashion-savvy of city streets, the tweed and leather jackets in classic colors like camel, brown, black and white, the knit mini sweater dresses in snow white angora accented with black or sky blue and the stunning, elaborate outerwear are sure to make fashionistas worldwide swoon. Even the accessories were not immune from the faux fur and arctic theme. Bags were designed to look like chunks of ice and knee high furry boots perched above a clear, plastic, ice-cube heel. Large collier necklaces of stone and rock-crystal, blingy metal rings and myriad bracelets and bangles added a touch of ethnic edginess to what was, at its core, another class, ladylike collection for Chanel.

ELIE SAAB: Elie Saab clearly understands the importance of the LBD (meaning, in this case, little or long black dress). His collection was full of them – in flattering fits and decorated with lace, fabric rosettes and curvy cutouts that showed just a flash of skin. Exposed zippers (which we also saw in Spring 2010 collection) little black sheer socklets paired with black patent leather heels, black gloves and chunky jewelry added a slightly punky feel to the otherwise elegantly feminine collection. Of course the collection wasn’t only made up of little LBDs. A few fur jackets, mini skirts and skinny pant leg suits also made their way down the runway in the collection’s prevalent color — black — while a series of cocktail dresses and gowns made entirely of tulle or covered in stunning, heavy sequins (think small rock crystals) introduced a welcome dash of color in gorgeous shades like loden green, toffee beige, teal and plum. 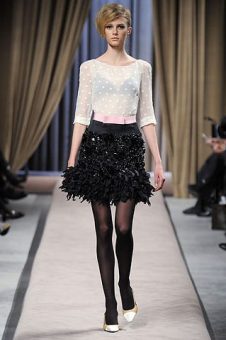 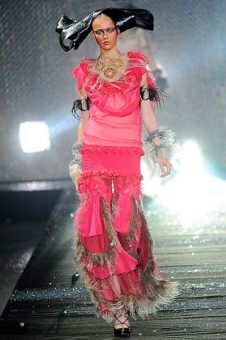 EMANUEL UNGARO: The hot topic surrounding this Emanuel Ungaro show was still Lindsay Lohan – was she involved in this collection? Would she appear at the Show? As it turns out, the answer to both was no. Set in a gorgeous gilded ballroom, Estrella Arch’s second collection for Ungaro began with a pair of cute polka dot turned animal print patterned cropped cigarette pants, paired with a brightly colored top, blazer and accessories — quite a detour from the more muted fall shades that dominated the other shows. To follow were a series of sweet, but not particularly original, dresses in solids and prints. A few of the elaborately pleated finale cocktail dresses in black and, naturellement, Ungaro’s signature fuchsia, were quite fetching, but, overall, the collection felt uninspired. And although this collection had a cohesion that Archs’ last collection lacked, the bright colors and light fabrics seemed more appropriate for a Spring runway show. Where were the knits, the leather and especially the fur?

GIAMBATTISTA VALLI: The show started late – apparently due to the tardy arrival of front row celebrity Brooke Shields – but, thankfully, was worth the wait. The collection was incredibly feminine, featuring dresses and coats that were adorned with beading and fabric that had been cut and gathered to look like feathers and rosettes. There was also a distinctly 60s, mod vibe to the Show with models sporting messy updos, heavily black lined eyes, nude lips and a series of rather smart-looking short shifts (in fabrics ranging from luxurious cashmere to sheerest of chiffon) paired with slingback pumps and opaque black tights. From chic suits for the ladies who lunch to sexy, sheer minis for the party girls and the occasional over-the-top gown for the red carpet, it looks like Giambattista Valli has once again delivered what will be a coveted collection.

JOHN GALLIANO: The invitation — a faux rawhide map of mountainous terrain – cleverly foreshadowed the journey encapsulated by Galliano’s show. “Her heart is her compass. . .” said Galliano in his program, whilst his models, dressed as foreign princesses with bronzed skin and elaborate ebony-wigged hairdos, trekked down a silver confettied runway. Although the outfits were too exaggerated and theatrical to be practical for everyday life, some pieces, like a flowy white sheer peasant blouse adorned with silver beading, the fitted blazers and fabulous embroidered, fur-trimmed outerwear, would look smart on any cosmopolitan city street. The show ended with a series of breathtaking gowns reminiscent of the 1920s in their shape and beading. Galliano, however, stole the show with his finale – dressed as a Mongolian trekker he dramatically appeared, real fireworks of gold shooting into the air on either side of him, to be greeted by thunderous applause.

Certainly a chic pantsuit. I especially liked the slightly retro shape of the suits at Akris where long, slender, slightly flaired pants were paired with cropped, double breasted jackets. Both Akris and Valli showed long sleeved tops of alternating black and sheer strips, which I think could be an ideal garment for under a jacket or sleeveless dress. As a horsewoman, I will definitely take a close look at the equestrian-inspired collection Galliano did for Christian Dior. The collections by Balmain, Celine and Lanvin for fall 2010 look as hot as ever. And, speaking of hot, I loved that Marc Jacobs sent curvaceous cuts and models down the runway at Louis Vuitton. Last, but certainly not least, there was the winter wonderland collection by Chanel. A gray mélange mini sweater dress is definitely on my list, as are the furry knee-high boots. Assuming the boots look as good on us mere mortals as they did on the models, they may just be this fall’s version of last fall’s must-have over-the-knee boot. One thing is for sure: it’s going to be fun shopping!