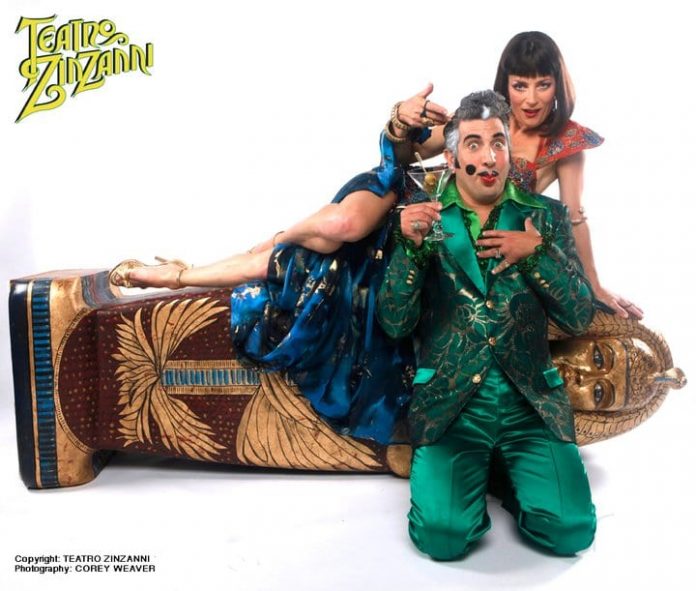 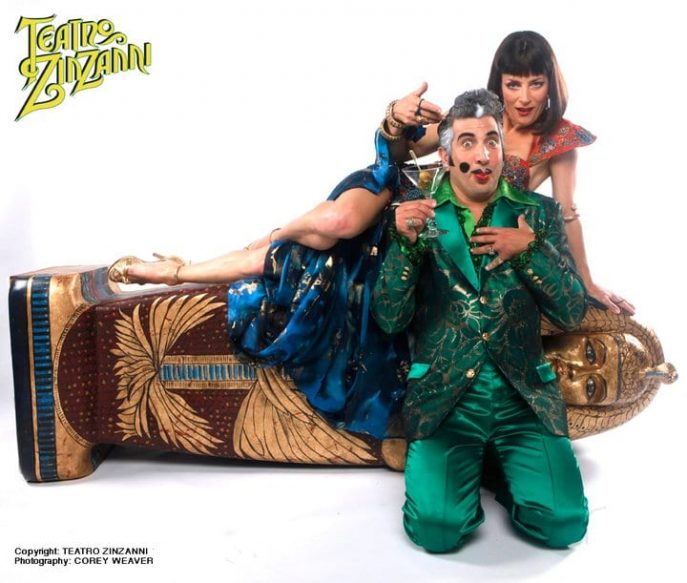 In San Francisco there are countless places to enjoy fine dining but only one destination for entertaining dinner theater: Teatro ZinZanni. Fantastic food, fun, phenomena and fantasy come together with electric energy and pizazz inside the Spiegeltent on the Embarcadero. The cast will have you mesmerized with beauty one moment and almost choked with laughter the next. Outside, the somewhat daunting mural of mischievous faces and airborne tricks may scream “circus” but this is no ordinary big top.

Once inside, “Master Mixologist,” Adam La Cagnina, can whip you up one of his 24 signature cocktails with names like “The Cure” or “Cowboy in Heels”. The atmosphere is thick with staff and servers dressed in a mix of Old West and burlesque attire. The audience can get in on the action thanks to the show’s boutique, which sells popular feathered headbands and hair pieces made by the show’s own costume designer.

The show explodes inside the world’s oldest Spiegeltent (Dutch for “Mirror Tent”) whose wood and mirror lined walls are supported by beams and rods that give the circular structure a carousel-like feel. The Spiegeltent, once served as a dance hall, and still retains its original mirrors and floors, is honored by a cast who fill it with the same bounding energy six nights a week. The dining room is their stage, the tables are part of the set, the table settings are props and like the servers, as a guest you may become part of the cast. Don’t be alarmed if one of the cast members offers to pepper your soup or sits on your lap. As Managing Director Patrick Markle puts it “the confusion between wait staff and performers is meant to be slightly disarming.” The effect is that you never know what to expect next.

The current showing of ‘Hail Caesar’, which runs through October 31, 2010, stars the statuesque Dreya Weber as a sassy Cleopatra and the quick-witted Frank Ferrante as a flamboyant chef named Caesar. The fiery siren Weber, showcasing strong and sultry vocals, pursues an unlikely lover in Ferrante, whose knack for picking on audience members is uncanny. When she fails to spike Caesar’s curiosity Weber breaks into a dynamic and stunning aerial sequence. Her emotions are pained but her performance does not look labored. Her tumultuous series of drops, twirls and swings from ropes made of braided fabric is dark and passionate. You may find it reminiscent of Pink’s 2010 Grammy performance . . . because that, too, was choreographed by Weber.

Caesar’s disinterest in Weber’s Cleopatra stems from the love of his “people” – the audience. He handpicks his cast from the dining room, boldly breaking into their personal space with the wolfish introduction “You look good . . . ” Through his jokes we learn about the subjects that make up his kingdom, both locals and tourists of all ages and races, who do many things for a living – all of which can be poked fun at. A cure for the common date night, some couples have come to celebrate honeymoons, others anniversaries, some are even there to meet the parents. Taking to the floor for a slow dance at the ZinZanni prom, we all felt closer together.

Even the most jaded critics who think they’ve already seen every noteworthy comic and acrobat were caught off guard by the peculiar talents of the love struck explorer Mr. PP, a lovingly goofy Tim Tyler. Jaws dropped table round as Tyler went to clear his throat before an amorous phone call and coughed up (count them) nine ping-pong balls, three of which he subsequently juggled using his throat muscles.

Each of the meal’s four courses is affiliated with a piece of the musical, whether it’s audience members testing the love potion in the soup or Caesar donning tokens of affection like a necklace of romaine to a special lady. The cast members and servers burst into song and dance throughout the room before serving up each and every course. While the food is excellent, it’s not the only reason to go. ZinZanni is having food served to you by a waitress dancing the tango with a rose in her mouth, and a full night of entertainment.

With six stunning costume changes Weber’s Cleopatra is undoubtedly fascinating in her headdresses, clothes bejeweled in beads and chains, draped in bright shimmering silks and velvets . . . but the show’s other artists in the supporting cast have the element of surprise.

The Chinese duo of Ming and Rui, playing menservants characteristic of the era, treat the audience to an energetic display of acrobatics throughout the show but demonstrate the depth of their strength and coordination executing an aerial showcase. Using vertical ropes and each other they create symmetrical forms, like human Rorschach shapes, side by side, above and below each other. The optical illusion of seemingly “Siamese twins” is enhanced when these dangling shapes spin in the air.

How could a homely Egyptologist and Scottish houseboy make pole dancing both respectable and sexy? That (too) is ZinZanni! Sausalito’s own Sandra Feusi and Sam Payne (respectively) take to the floor and the pole in an immaculately choreographed “Vertical Tango”. The two climb the ceiling’s height on the pole and begin weaving in and out of each other, introducing flips, slides and holds that resemble the competitive ballroom dance – suspended in the air. The sensuality and intensity between the pole and the pair is characteristic of a dark bar in Buenos Aries. Watching the couple hold each other passionately, dramatically spin to the ground and transition seamlessly from pole to floor, it’s as though the audience has witnessed something secret and special.

Teatro ZinZanni comes to us from Seattle but has been a Bay Area staple for ten years. While two men could disassemble the remarkable Spiegltent in just two days, this “circus for grown-ups” isn’t going anywhere. With a constantly changing seasonal program you’re never too old for this circus and can never go too many times. While ‘Alcatraz Landing’ next door attracts the out-of-towners, this phenomenon has become a well-known local gem that’s not to be missed! For a society that’s losing its sense of humor and getting harder and harder to please, ZinZanni offers up a platter of hysterical, remarkable, energetic and charismatic fun that will leave your inner critic in the dust and bring out your carefree inner child . . . if only for one night.