In case you haven’t heard, Twitter rolled out a simple polling tool that allows everyone to create polls on Twitter. With just a couple of taps, anyone can weigh in on the topics you choose. If you want the public’s opinion, ask in a Tweet. A Twitter poll is a new way to engage your audience, to understand exactly what people think, and it is an easy way to make your voice heard.

You create your own two-choice poll right from the compose box and it will remain live for 24 hours. Also, you can vote on any poll, and how you voted is not shared publicly. As an example, here is one I created — fashion related:

Velvet Poll:
Planning my winter wardrobe. Is velvet OK to wear during the day? Click here to respond on Twitter. 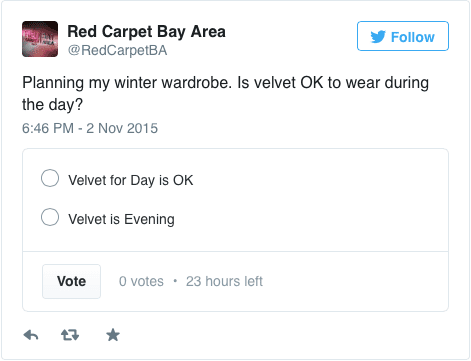